In January 1917, the British armed merchant liner, Laurentic was transporting 43 tons of gold bullion from Great Britain to North America when it struck two German mines and sunk off the coast of Lough Swilly.  The gold, which was earmarked to help finance the Allied war effort is desperately needed by the British government.

To salvage the treasure, they ask the Royal Navy’s preeminent diving expert, Lieutenant Commander G.C.C. Damant, to lead a secret mission to recover the gold and help the Allied war effort.

More than a tale of underwater adventure, my latest book focuses on the achievements and life of G.C.C. Damant whose contributions to diving history allowed man to dive deeper than ever before.  We not only become fully immersed in the hazardous history of early modern diving, but we also explore the confines of sunken German U-boats to steal codes and ciphers, and watch how what should have been a simple salvage of gold, turned into a multi-year epic of frustration, obsession, and ultimate triumph. 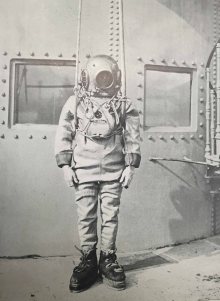